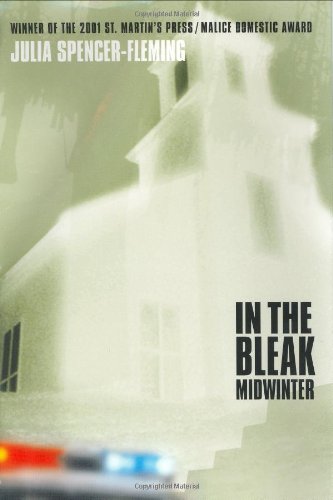 IN THE BLEAK MIDWINTER

In this debut novel, a riveting page-turner from start to finish, born-and-bred Virginian Clare Ferguson, newly ordained priest of St. Alban's Episcopal Church in the small upstate New York town of Millers Kill, is faced with not only an early December snowstorm and the bitter cold of her first Northern winter but also a conservative vestry, who apparently expended all their daring on hiring her, a female priest. When a baby is left on the church doorstep with a note designating that he be given to two of her parishioners, Clare calls in police chief Russ Van Alstyne. The foundling case quickly becomes an investigation into murder that will shatter the lives of members of her congregation, challenge her own feelings and faith and threaten her life. With her background as an army helicopter pilot, Clare is not a typical priest. Smart, courageous and tough, she is also caring, kindhearted and blessed with a refreshing personality. Likewise, the other characters are equally well developed and believable, except for the young pediatrician, who speaks more like a hip teenager than a professional. It is a cast readers will hope to meet again, while a fast-paced plot keeps the guess work going until the very end. Along the way, there is an exceptionally spine-chilling confrontation. The vivid setting descriptions will bring plenty of shivers, but the real strength of this stellar first is the focus on the mystery, which will delight traditional fans.