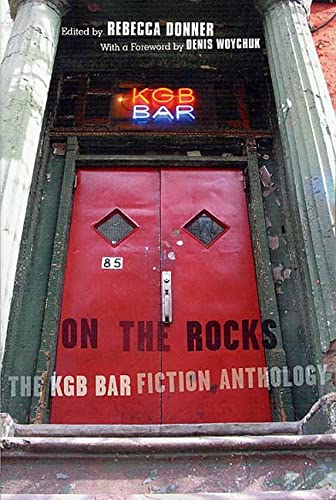 ON THE ROCKS: The KGB Bar Fiction Anthology

A tiny East Village tenement room that used to be a meeting place for Ukrainian socialists, KGB Bar launched a reading series in 1994 that has become a beloved fixture of the New York literary scene. This third anthology (after and the ) focuses exclusively on fiction. Edited by Donner, literary director of the KGB Sunday Fiction Series, it features both veterans and ingenues, including such talents as Jonathan Lethem, Mary Gaitskill and Ben Marcus. Joyce Carol Oates's "In Hiding" depicts an isolated poet who begins corresponding with a talented admirer in a Kansas penitentiary. "The Witch," by Francine Prose, is a genre-bending tale about a woman in a problematic relationship who uses her mysterious gifts to draw the attention of a potential rescuer. Peter Ho Davies's virtuosic "What You Know" is about a writing teacher who decides to change his methods after one of his students becomes a murderer. A young Brooklyn mother's anxiety begins to control her life when her child falls down a flight of stairs in Dani Shapiro's "Plane Crash Theory." United only by their uniformly high level of originality and artistry, these innovative stories make for a top-flight anthology, a treat for anyone who wants to sample the best in contemporary fiction.