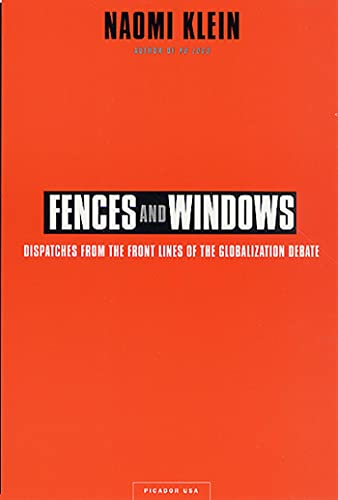 FENCES AND WINDOWS: Dispatches from the Front Lines of the Globalization Debate

The success of Klein's , a slashing account of how corporations actively go after "market share" and the global misery that can result, makes anticipation for her next project high. As Klein notes in her preface, this book is more a stopgap than a follow-up. Covering the period of late 1999 to 2002, the book collects Klein's in-the-trenches journalism about sweatshops, genetically modified foods, evolving police tactics for crowd control and more. The two title images recur throughout: the fences are real, steel cages keeping protesters from interfering with summits, but they are also metaphorical, such as the "fence" of poverty that prevents the poor from receiving adequate education or health care. Klein argues that globalization has only delivered its promised benefits to the world's wealthiest citizens and that its emphasis on privatization has eroded the availability of public services around the globe. Critics have suggested that the "anti-globalization" movement (a term loathed, Klein notes, by many people actually involved) lacks a cohesive structure, but Klein generally sees this decentralization as a strength, likening the small groups' "hub and spoke" organization to that of linked Web sites. While Klein offers snapshots of success stories involving Nike, Starbucks and other corporate monoliths, she wisely does not suggest any easy solutions to this complex mesh of problems. Despite post–September 11 talk to the contrary, these dispatches indicate that the movement is far from over.