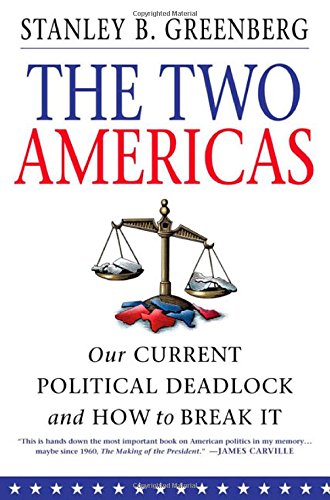 THE TWO AMERICAS: Our Current Political Deadlock and How to Break It

Pollster Greenberg ( ), who was part of Bill Clinton's victorious "war room" team during the 1992 presidential campaign, is dissatisfied with the country's political split down the middle and has ideas for how to break the Democratic/Republican impasse. He considers the last, embattled presidential election "just the current moment in an era of political deadlock" stretching back to the Eisenhower administration, a half-century in which the two parties have traded power back and forth unable to form a lasting dynasty. The 2004 election, he says, promises to be just as competitive. Analyzing each party's potential, Greenberg breaks down their loyalists into identifiable factions, like "F-You Boys" (Deep Southern white male blue-collar workers who "think President George W. Bush is their guy") and "Super-Educated Women" (Democratic loyalists though their husbands, "Privileged Men," are Republicans), Then Greenberg closely examines three regional blocs that may be up for grabs: he calls them Tampa Blue, Seattle's Eastside Tech and Heartland Iowa. In the second half of the book, he imagines how party leaders might plan to keep or retake the White House. His analysis of the GOP's strategy to present Bush as the carefully scrubbed "Reagan's Son" seems dead-on. Several possible strategies are described for Democrats, but his clear preference is for putting a 21st-century spin on the values and agenda of the Kennedy-Johnson era, with such talking points as universal health care and education, tax reform, even a new "Apollo project" to tackle energy security and global warming. Intricate strategic analysis and close attention to a wavering electorate make this political handbook stand out from the pack.