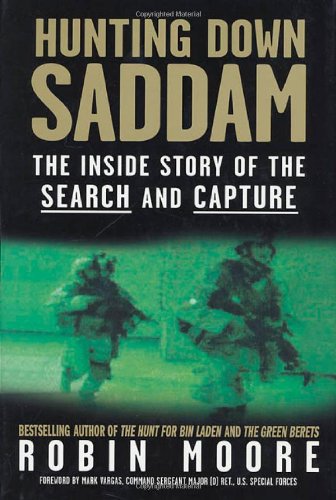 HUNTING DOWN SADDAM: The Inside Story of the Search and Capture

The doughty author of and the instant-seeming gives us this jumbled but valuable set of accounts of crucial operations in the Iraq war. The focus is on Special Forces, to which the author remains loyal, given his background with them going back to the Vietnam War. Moore, who suffers from Parkinson's disease, went to Iraq last year, at the age of 78, and followed Task Force VIKING's (the military uses all caps when referring to such objective-oriented groups) work with the highly factionalized Kurdish armed forces, as well as Task Force DAGGER's infiltration of southern Iraq, neither much covered in the general media. Also unique to this book is the narrative of a 4th Infantry battalion's operations in Tikrit, Saddam Hussein's hometown and a center of continued Iraqi resistance, where American troops and their Iraqi allies accomplished a good deal of nation building, or at least peacekeeping, while taking casualties. The grand finale is, of course, Saddam's capture in a "spiderhole" outside Tikrit, where the story had to end in order to meet the publication deadline. This may have led to the slightly rushed feel of the prose, but the pro-military tone is expected from the author and his assistants and informants, most retired or serving military. Also rushed, but vivid, are portraits of those Americans who are still at the "sharp end" in Iraq, who deserve knowledgeable portrayals of and full credit for their dangerous work, which they receive here. This book adds to our knowledge of how Spec Ops have been integrated with regular units (with a high degree of success) in the last generation, and it will appeal to Moore's established audience and to serious students of Special Operations, along with most people interested in the Iraq war. The pressing topic should carry many readers over the book's awkward prose and fragmented structure.