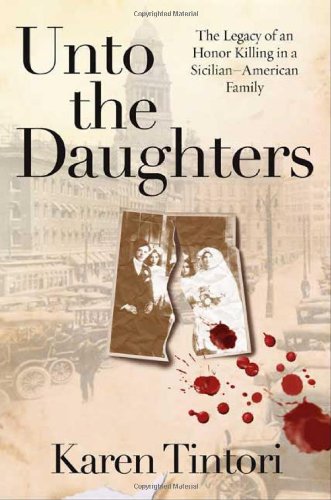 Unto the Daughters: The Legacy of an Honor Killing in a Sicilian American Family

Tintori's poignant memoir of the recent discovery of her great-aunt's murder deeply underscores her Sicilian culture's troubling subjugation of its women. Tintori (Trapped: The 1909 Cherry Mine Disaster) recounts how in 1993 her aunt and mother reluctantly told her of an obliterated name from her great-grandfather's passport to America. Gradually Tintori discovers the fate of the missing youngest daughter, Francesca, by working backward in time to when the Costa family first made its way to Detroit from Corleone, Sicily, in 1914. The family settled into comfort in Little Sicily: the girls enjoyed scant education and were married off early, while the boys worked at the Ford factory and ran with rum-runner gangs. Although her sister Josie made a successful love match, Francesca pined for the barber's son, but was forcibly engaged at 16 to a scion of the Mafiosi in order to better her family's fortunes. Francesca eloped, to the family's dishonor, and was probably murdered (shackled, dismembered and thrown in the waters of Belle Isle) by her brothers when she dared to return. Because of her family's wall of silence, Tintori finds no sense of catharsis here, only a harrowing tale of sorrow and shame. (July)