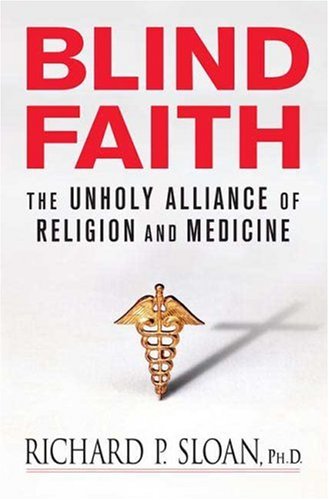 Blind Faith: The Unholy Alliance of Religion and Medicine

Thanks to some studies and to accounts by physicians, patients and theologians, it has become popular to believe that prayer can heal the sick and that attending religious services regularly can extend one's life. But does the evidence for a link between religion and health hold up? Sloan, professor of behavioral medicine at Columbia, probes the matter in this sometimes provocative but often prosaic book. Reports of the relationship between religion and medicine, he says, are greatly exaggerated and detrimental to both. He writes that dissatisfaction with contemporary medicine, uncritical media stories about religion and health, and advocacy groups that promote a link between religion and health have encouraged patients to seek alternative treatments that exploit that connection. Sloan examines the thousands of reports that prayer has been the key element in healing and finds many are based on anecdotes rather than systematic data collection. Even scientific studies on the healing capacities of faith and prayer do not always prove what they are purported to prove; some, for instance, touch only peripherally on the role of religion in health. For Sloan, attempts to connect religion and medicine can jeopardize patients' lives by giving false hope. Although repetitious, Sloan's book offers clear challenges to patients and medical professionals who embrace prayer as a means of healing.