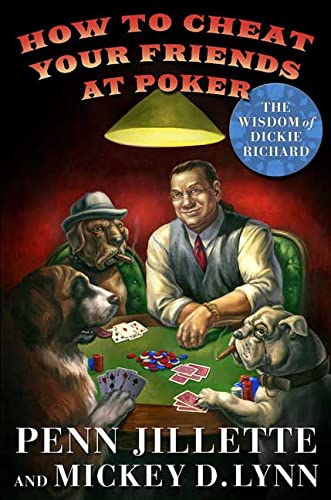 How to Cheat Your Friends at Poker: The Wisdom of Dickie Richard

Jillette (the Penn of Penn & Teller) and his pseudonymous poker-cheating guru, Dickie, begin by saying that anyone who loves playing poker should "throw this book away." Readers will find no better advice. The dubious premise is that Dickie took Penn under his wing when Penn was 18, and as a favor, he has agreed to publish the card sharp's book. But calling the wit and wisdom of Dickie Richard sophomoric is far too kind. More accurate descriptions would be amoral ("Morality is what you make of it"), , scabrous and without redeeming social value. And the book is marred by obscenities, class insults and a machismo that would be comical if it weren't so vulgar ("If you are going to cheat, whip out your prick and cheat like a man"). If this was meant to be a joke, it's not funny. And if it's meant seriously, then the book itself is a cheat: when you're done with it, you still won't really know how to cheat at poker.