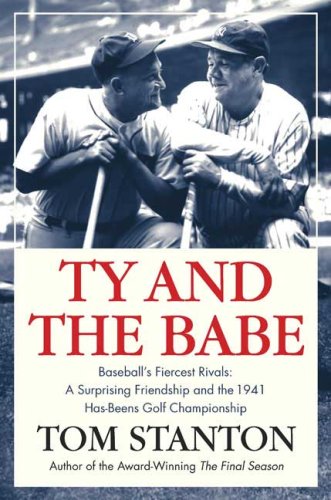 Ty & the Babe: The Incredible Saga of Baseball's Fiercest Rivals

Stanton's story of the rivalry-turned-friendship of Ty Cobb (with the Detroit Tigers) and Babe Ruth (with the Red Sox and Yankees) is as splendid as a sunny spring day at the ballpark. Cobb held eight consecutive batting titles the first time he stepped up to hit against Ruth, whom Stanton ( ) describes as "a platter-faced, gray flannelled 20-year-old" rookie pitcher in 1915. The two men were opposite in many ways—a Southern Baptist slap hitter versus the Northeastern Catholic home run king—and they would go on to become enemies who competed fiercely for 14 seasons, frequently taunting one another and almost coming to blows. Ruth usurped Cobb's title as the greatest player in baseball and eventually turned Cobb's distaste for him into respect. After retiring, they were among the first class inducted into the Hall of Fame in Cooperstown in 1939. Two years later, they met in a golf match that stoked their competitive fires one last time and cemented their friendship. Sportswriters regularly characterize baseball players as one-dimensional, either deities or demons, and no two players suffered this fate more than this pair. Cobb is often recalled as a short-tempered racist and dirty player, and Ruth cast as a beer-drinking, hot dog–eating simpleton, but Stanton portrays them sympathetically as exceptionally talented men with complex flaws. Stanton's writing is seamless, exploring the lives of both men but never lapsing into tedious detail.