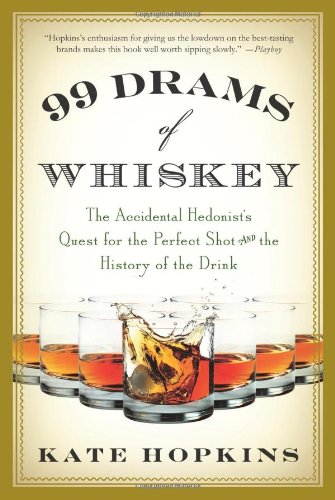 99 Drams of Whiskey: The Accidental Hedonist’s Quest for the Perfect Shot and the History of the Drink

Prompted by the legend of a man, Mr. Disposable Income, who paid over $70,000 for a rare bottle of single malt Scotch whisky, Hopkins and her friend Krysta hit the road on a quest to parse the spirit’s immense appeal—and to look for the perfect shot of whiskey. Part road-trip memoir, part history and part handy tasting guide, Hopkins’s search takes them to Ireland, Scotland, Pittsburgh (the author’s hometown), Kentucky and Canada. Hopkins, a popular blogger who goes by the moniker “The Accidental Hedonist,” has an easy, friendly tone, and her book often reads like a series of blog posts, albeit longer and well-researched. This works well when Hopkins gives historical context—how blended whiskeys overtook traditional whiskey in popularity, the story of the Whiskey Rebellion in western Pennsylvania and how Prohibition decimated the U.S. whiskey industry. But the casual tone can make the first-person narrative sound a bit like two American coeds on a whiskey-bingeing spring break (Hopkins and her companion are in their early 40s and 30s, respectively). Still, this is a pleasant and informative read.