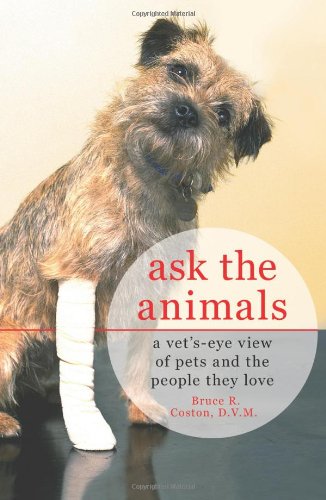 Ask the Animals: A Vet's-Eye View of Pets and the People They Love

Virginia veterinarian Coston cobbles together a number of his columns from a local newspaper in this moving account of his practice. Heartbreaking vignettes include the pitch-perfect opening depiction of an elderly man's anguish over putting his dog down, Coston's own grief at the death of his beloved cat and a series of linked chapters about a wealthy man's love for his miniature dachshund. Coston leavens the somber stories with lighter moments—his first encounter with a sick chinchilla, for example, and his hilarious failure to convince a concerned caller that she isn't killing a baby chick by boiling an egg for supper. When writing from inside his practice and about his training to become a vet, Coston comes off as competent and compassionate, but too much of the collection draws from the author's mundane home life; more pet and less vet might have made for a Herriot-class book.