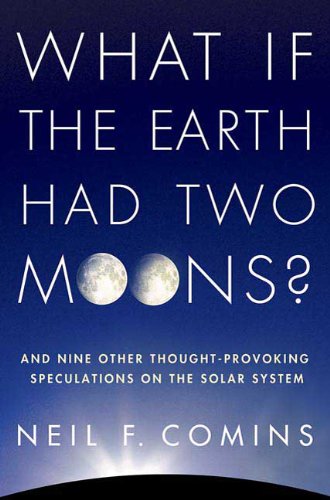 What If the Earth Had Two Moons: And Nine Other Thought-Provoking Speculations on the Solar System,

Armchair astronomers and hard SF fans who love a good game of cosmological “What If?” will find this an entertaining follow-up to physicist Comins’s Here he presents 10 more intellectual puzzles that explore new worlds, and imagine what life there might be like. Each chapter opens with a vivid glimpse of a hypothetical new world, such as in the title scenario, where Earth’s gravity captures a second moon—a scenario that ends in destruction. Equally disastrous would be an Earth with a thicker crust—unable to form new volcanoes, hot magma would simply burn through the crust’s surface, melting continents and the ocean floor. In another scenario, our solar system forms 15 billion years later than it did, prompting Comins to conjecture that aliens would have more time to traverse great distances to the planet and colonize it. This is a lucid, thoroughly accessible presentation of what might have been that is sure to make this volume as popular as its predecessor. 25 b&w line drawings.