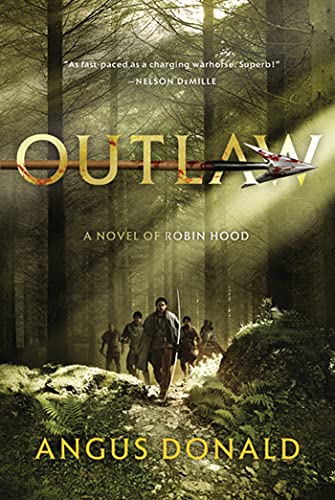 Outlaw: A Novel of Robin Hood

Donald drives a sword through the heart of the smiling, joking Robin Hood in his stateside debut, recasting the jolly thief of Nottingham Forest as the vicious leader of a very unjolly band of cutthroats who are prone to the slaughter or mutilation of enemies, betrayers, and anyone thought to be disloyal. The story begins in 1189 as Alan Dale, a 13-year-old thief, joins Robin's band of drunken and debauched outlaws and seeks revenge on Sir Ralph Murdac, the high sheriff of Nottingham, for the murders of his parents. While the outlaws are plundering and killing rich travelers and clergymen, a traitor betrays Robin to Murdac, resulting in Alan's capture and torture, which only hardens his resolve to kill the sheriff and several other chain-mail baddies. Add miraculous escapes, the rescue of a fair maiden, romance, witchcraft, much drunkenness, and the introduction of Friar Tuck, Little John, Will Scarlet, and the evil Prince John, and you get a rousing yarn that takes the story you're familiar with and gives it a lively jolt of brutality and gore. (Apr.)
close
Details