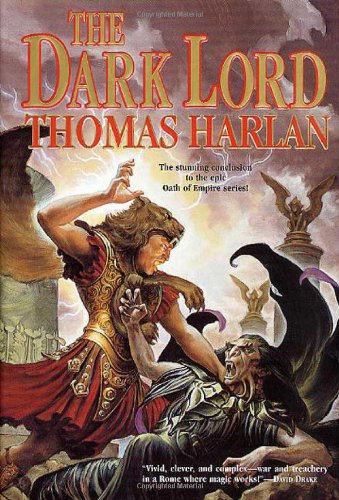 THE DARK LORD: Book Four of the Oath of Empire

In the fourth volume of his Oath of Empire series, Harlan () brings his exquisitely detailed, multifaceted saga of an alternative seventh-century Roman Empire to a satisfying close. Familiarity with the three previous installments, however, is essential to understanding the motivations of some characters, Mohammed in particular. While the author relegates some important individuals from the earlier books to bit roles in this movie-like chronicle, he develops others more fully, though with somewhat confusing attributes and rationales. Galen, emperor of Rome, continues to hold the fate of the Empire in the balance, alternately aided and frustrated by his sorcerer brother, Maxian. The resurrected Gaius Julius (Caesar) and the Duchess Anastasia intrigue against one another and the brothers, playing out the traditional Roman grasp for power. All oppose the evil Persian sorcerer, Dahak, lord of the seven serpents, who can count as his allies the King of Kings, the Palmyran queens and the raised dead. The conflict comes to a head first in Alexandria, where Aurelian, the middle brother, faces especially bloody fighting, dust and suffering. On Aurelian's death, the action moves to Sicilia, where Maxian, now emperor, finally understands the true nature of his enemy. Rip-roaring battle scenes offset the sometimes slow pace necessary to keep all the complexities of the story on track. This is opulent historical fantasy on a grand scale.