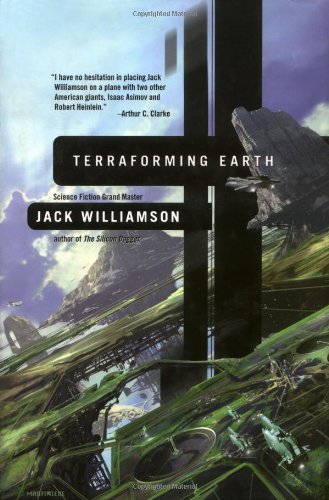 The OED credits SF Grand Master Williamson (; ; ; ) for coining the term "terraforming" (in his 1942 novel, ) to describe an alien world altered for human habitation. With the terraforming of Earth itself, the original concept now gets an oblique and awesome twist well over half a century later. Williamson's skill at speculative fiction is once again evident in this far-future saga of mankind's destiny, previously serialized in and . Driven by the potential threat of asteroids, wealthy eccentric Calvin DeFort set up a robot-run moonbase, Tycho Station, with frozen tissue specimens of plant and animal life. The value of this "safety net for Earth" becomes evident when a devastating asteroid impact brings a new Ice Age. Eventually, clones of the few survivors study their past history and train to reseed the planet by sowing the scarred surface with life-bombs. Bringing the gift of life, biologist Tanya and pilot Pepe are rewarded with death in the hostile environment. A million years later, more clones continue the mission. Earth evolves. A new civilization arises and crumbles. Generations of clones march through the millennia, continuing to examine the planet's riddles and ever-changing enigmas, even as Earth is on the ascendant. Throughout, poetic undercurrents permeate this masterful work by a superb chronicler of the cosmic.