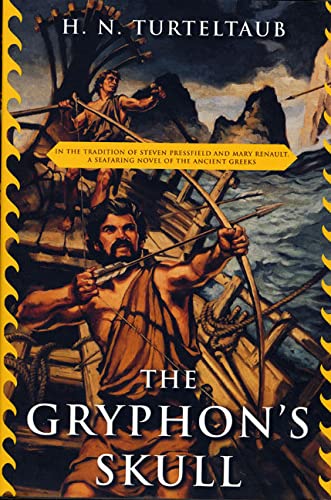 Sea-faring merchants Menedemos and Sostratos, the bickering cousins of , Turteltaub's previous historical novel set in ancient Greece, are back again with an adventure taking them across the Aegean from the free city of Rhodes to glittering Athens. On their way to the city with a cargo of precious goods, they pick up the skull of an unusual bird. The scholarly Sostratos believes it is that of a gryphon, and thus proof of the existence of the mythical beast. The more down-to-earth Menedemos has little interest in the skull's scientific value, but hopes the philosophical schools in Athens will compete to purchase it. On the relatively short journey, they are plagued by pirates and the clashing forces of Egyptian Ptolemaios and Greek Antigonas, as well as the latter's troublesome nephew Polemaios. Despite these obstacles, Menedemos and Sostratos find plenty of time for haggling, with other merchants as well as with each other. Ladies' man Menedemos often courts trouble by ogling other men's wives, although he restrains himself for Baukis, the attractive young second wife of his father. Sostratos, although anxious to see the Athenian philosophers, has time for a delightful dalliance with the beautiful brothel mistress, Metrikhe. The author has spelled names as the Greeks did—Kyklades, Thoukydides, Skythians—and this adds to the fun. In the end, readers will count themselves satisfied with the journey.