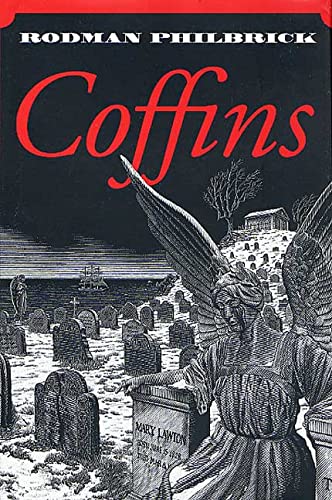 Best known for his young adult novels (), Philbrick swerves from his usual path with this adults-only supernatural horror show, certainly not for the squeamish or faint of heart. Just before the Civil War, young doctor Davis Bentwood befriends a dwarf named Jebediah Coffin. Jeb may be small of stature, but he has the brains and energy of 10 men. Davis is a doctor who does not practice; he is a lazy and self-centered young man who dabbles in science and the new fad of transcendentalism. When an urgent telegram summons Davis to the Coffin family home in Maine, he is unexpectedly thrown into a shocking world of curses, madness, malevolence, hauntings and violent death. Jeb's twin brothers have been cut to pieces in a sawmill, and his baby nephew is found frozen to death in a stifling hot nursery. Jeb's father, Capt. Cash Coffin, raves like a lunatic, and the entire family is paralyzed with fear and grief. Davis learns that the wealthy Coffins are proud abolitionists, even using their home as part of the Underground Railroad to help escaping slaves reach safety in Canada. He also learns of a terrible secret and a horrible curse put on Jeb's father 20 years earlier. The curse is now acting itself out, and the Coffin family is crazed with fear as the Coffin sons die gruesome deaths one by one. The body count is high, and Philbrick uses gloomy, graphic and gory means to dispatch the victims, but the story lacks suspense and pegs very low on the spooky meter. Sadly, the well-crafted pre–Civil War abolitionist angle is merely window dressing for an unconvincing tale of superstition awash in blood and body parts.