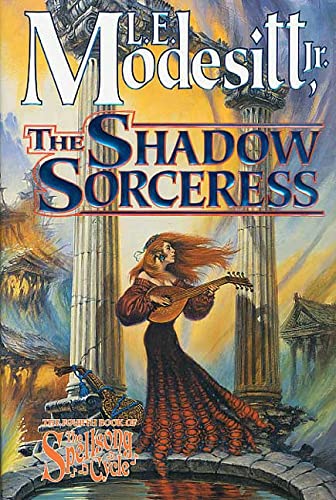 In Modesitt's fourth absorbing book of the Spellsong Cycle (, etc.), the student Secca picks up the mantle of musically managed magic from Sorceress-Protector Anna, protagonist of the earlier novels set in the Europeanoid world of Erde. Secca reluctantly serves the legitimate Lord of Defalk, for whom Anna was regent, and the imperfect leader Robero—a bumbler known less elegantly in childhood as Jimbob. One of Robero's annoying habits is matchmaking (few, if any, suitable consorts exist for powerful women with frightening and exhausting powers). The early pages demonstrate road-building, a constructive and popularly supported sorcery performed with a band of musicians, and then a solo, slow-acting assassination as examples of "the shadow side of sorcery"—Secca uses that term in weighing the death of one cruel man against the sufferings of many, but later is surprised when she herself is referred to as "shadow sorceress" for her manipulating events from the sidelines. Defalk's leaders must face the consequences of Anna's desperately inventive changes in their war-torn country, as well as the serious ongoing threat of the Sea-Priests from beyond, who employ major sorcery and subjugate women in literal chains. Secca's taking charge and developing her staff and personal relationships provide the chief interest here; the full story of the Sea-Priest invasion presumably awaits future volumes in the series.