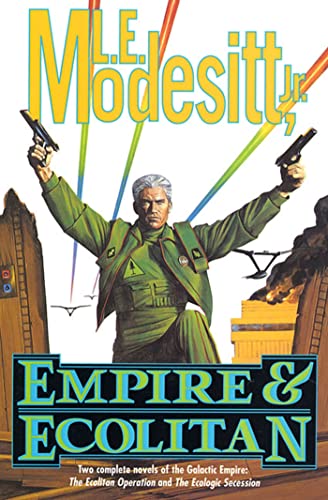 As shown in these two solid if not spectacular reprints (, 1989; , 1990), part of the author's far-future action SF series about the planet Accord's Ecolitan (or Ecologic) Institute and its struggle with the evil Empire, Modesitt simply can't write a dumb book. Major Jimjoy Wright, a top Imperial special operative, successfully overthrows the government of a minor planet that's suspected of disloyalty to the Empire. With the unpredictability that dogs covert operations through all time and across all space, the new government is actively rebellious. As his dubious reward Wright is sent to Accord to investigate the Institute, which turns out to be the center of an opposition movement advocating Accord's independence from the Empire. In a classic "man who learns better" plot, Wright comes to understand the depth and legitimacy of Accord's grievances. He also acquires a few of his own, as he learns that his superiors were behind two successive attempts on his life. At this point he adopts the identity of "Professor Whaler" and sets out to lend his own talents for applied violence and covert skullduggery to the Institute and to his fellow citizens of Accord. The characterization is not up to the standard of the author's more mature work, but the pacing is, if anything, brisker and the world-building is as sound as a rock. Altogether the reappearance of these novels can only enhance the author's high reputation for intelligent storytelling among readers familiar primarily with his recent fiction.