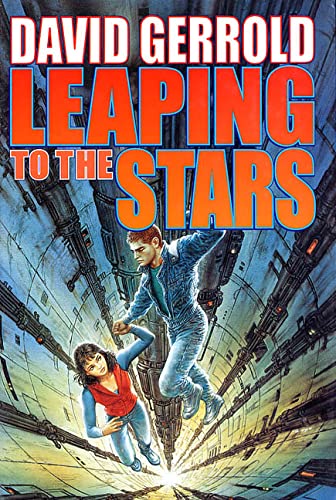 LEAPING TO THE STARS

Fans of Heinlein's trademark blend of space-bound high adventure and serious political philosophy will feel right at home in the third and final book of Gerrold's series (; ) detailing the adventures of 13-year-old Charles "Chigger" Dingillian and his family as they seek a place to call home. On the moon, Charles's HARLIE unit, an advanced artificial intelligence device packed into the body of a monkey, is coveted by Lunar Authority as well as by the revolutionaries who seek to overthrow it. The only option left for escaping these forces is to sign on as colonists bound for Outbeyond, Earth's most distant colony, where the only surety is a life of backbreaking labor—but also the chance to finally be free. Once the colony ship has set off, however, nothing goes smoothly. The colonists, particularly Charles's divorced parents and two brothers, face pressure from Revelationists, a fundamentalist group traveling aboard the to their own colony on the way to Outbeyond. The Revelationists believe HARLIE is evil and must be destroyed, along with those who possess it—and the Dingillians are at the top of the list. If that isn't enough, Charles has his own growing uncertainty about HARLIE's motives. Those new to the series will find the opening tough to follow, but through his engaging adolescent narrator, Gerrold gradually provides enough backstory to clarify without slowing down the action. The appeal to YA readers is obvious, but plenty of adults are also sure to enjoy this thoughtful adventure.