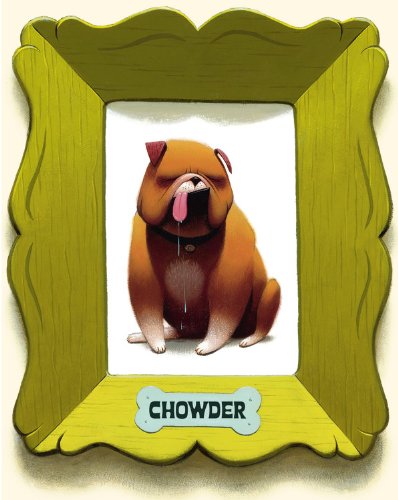 Chowder, an English bulldog, baffles everybody with his precocious behavior. He uses the toilet and the computer, and while regular dogs chew bones, he excavates a dinosaur skeleton. His doting owners, Madge and Bernie Wubbington, tote him in a baby backpack; they "liked to think of him as quirky, but most people thought he was just plain weird." One day, lonesome Chowder spies a billboard for a megamart's new petting zoo: "All the neighborhood dogs had said Chowder belonged in a zoo, and he wondered if they were right." In bizarre events involving the supermarket and a kickball game, Chowder befriends the Critter Corral's captive pony, cow, sheep and others. With mixed results, Brown ( ) invests food shopping and zoo life with excitement. He composes smooth, meticulous paintings, and softens his sculpted pencil edges with a faint acrylic fuzz. Chowder's owners are disco-era throwbacks; their dorkiness helps account for Chowder's uniqueness, although the nerd jokes and the retro palette might be lost on younger readers. Brown pictures Chowder with melancholy jowls and sad, squeezed eyes; the most sympathetic pictures show his beady eyes widening and a drippy tongue lolling happily from his bulldozer-scoop underbite. Bulldog lovers may find Chowder endearing, but despite his offbeat pursuits, he remains elusive, and the convoluted, upbeat outcome feels like wishful thinking. Ages 3-6.