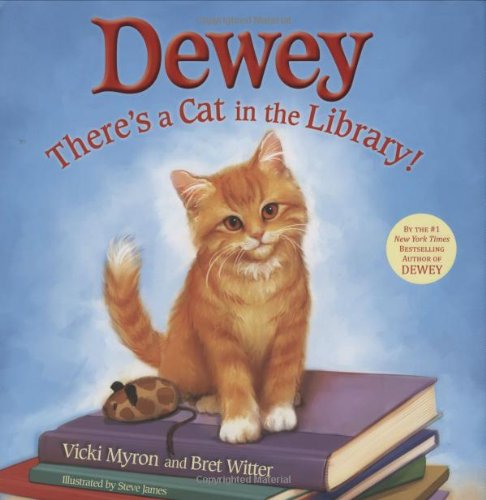 Dewey: There's a Cat in the Library!

This genial if cutesy adaptation of the authors' bestselling gets an energetic boost from James's digitally rendered art. Animal-loving readers will be charmed by the realistic, closeup depictions of young library patrons and their tender (and sometimes not-so-tender) interactions with Dewey, who is based on a real-life feline adopted by Myron after it was abandoned in the book drop of her Iowa library. The narrative becomes overly precious, though, when it ventures inside Dewey's head: “ ' ,' Dewey thought. “ .” And as he joins story hour he thinks, “Wowzy whiskers, this looks fun.” Despite being manhandled by some young patrons, the cat confides to his toy mouse that he is determined to help people (“I'm ninety-two percent convinced that that's the reason I'm around”) and makes good on his promise by cheering up a sad girl who's reading alone. He then proclaims himself a “REAL library cat,” which (the story concludes, on a well-worn note) “felt... !” Ages 3–6.