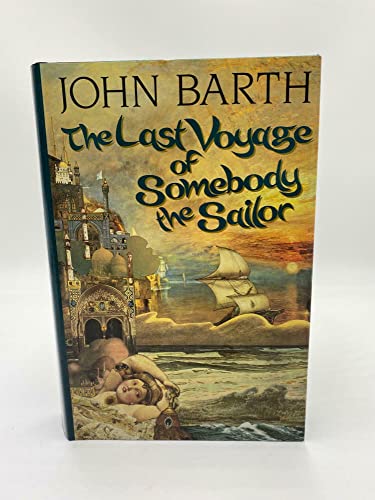 The Last Voyage of Somebody the Sailor

Just when you may have concluded, like Queen Scheherazade's husband, that you've ``heard them all,'' Barth ( The Tidewater Tales ) proves again how original and entertaining he is. Like many of the author's previous works, his latest blends fantasy, mythology, existentialist wit, bawdy humor and metafictional conceits. But though his opening words declare, ``The machinery's rusty,'' the new novel is a testament both to Barth's undiminished generative powers and to his maturity of vision. In the elaborate plot, a ``fifty-plus,'' ``once-sort-of-famous'' New Journalist named Simon William Behler is mysteriously transported to the medieval Baghdad of Sindbad the Sailor. Behler--known variously as ``Somebody the Sailor,'' ``Baylor'' and ``Sayyid Bey el-Loor,'' falls in love with Sindbad's daughter Yasmin and gets enmeshed in Arabian intrigues. The intrigues revolve around such nagging questions as the intactness of Yasmin's virginity, the veracity of Sindbad's tall tales and the whereabouts of a wristwatch Behler needs in order to return home. All this is dealt with in the course of six evenings of storytelling at Sindbad's dinner table. Barth creates whole and engaging characters with his usual wealth of wordplay, allusion and satire. But the novel's greatest achievement is how it connects the conventionally realistic story of Behler's 20th-century life with the outsize and metaphorical world of Sindbad, reflecting in the process on the nature of stories, dreams, voyages and death. BOMC selection; major ad/promo; author tour . (Feb.)
close
Details