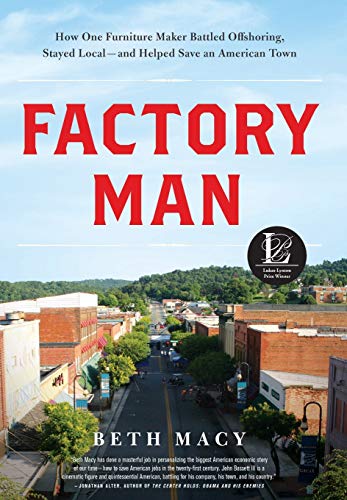 In her first book, winner of the 2013 J. Anthony Lukas Work-in-Progress Award, Roanoke Times reporter Macy explores the effects of globalization on America’s furniture manufacturing industry via the story of the Bassetts, a family from Virginia, whose Bassett Furniture Company was once the world’s largest producer of wooden furniture. In the 1980s, cheap Chinese imports began to flood the U.S. market, prompting many domestic furniture makers to move their factories abroad. But John Bassett III fought back. A “larger-than-life rule breaker,” J.B. III (as he was known) hired top trade lawyer Joe Dorn and convinced members of the U.S. furniture manufacturing industry to support him in filing a petition against China for unfair trade practices, ultimately saving his company, Vaughan-Bassett (an offshoot of the family business), along with hundreds of jobs. Macy’s riveting narrative is rich in local color. It traces the history of the Bassett family and the U.S. furniture trade, from the “billowing smokestacks” of Southern towns along Route 58 to the imposing factory complex near Dalian, China, and eventually to Vietnam and Indonesia, where manufacturers sought ever-cheaper labor. Macy interviews the Bassett family, laid-off and retired workers, executives in Asia, and many others, providing vivid reporting and lucid explanations of the trade laws and agreements that caused a way of life to disappear. [em]Agent: Peter McGuigan, Foundry Literary + Media. (July) [/em]
close
Details