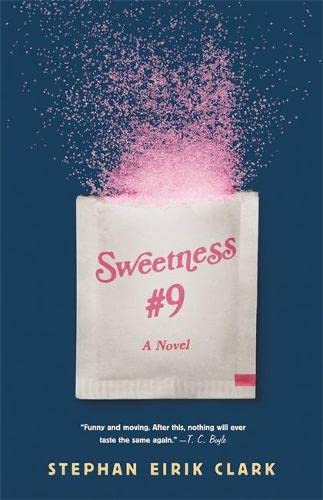 Artificial sugar substitutes, chemically crafted flavor enhancers, and unnatural food colorings are trapping Americans in a self-destructive cycle of addiction, suggests Clark in his first novel, a hyperironic, hyperworrisome account of one man’s journey through the processed food industry. The horror begins in New Jersey in 1973, when recent Rutgers food science program graduate David Leveraux goes to work for corporate giant Goldstein, Olivetti and Dark. His first assignment is testing Sweetness #9, a product in development, on rats. The product is eventually approved and put on the market, but as “the Nine” catches on (it’s 180 times as sweet as sugar at a fraction of the cost), lab rats, monkeys, the Leveraux family, political leaders in Washington, and the general American public all show signs of depression, anxiety, dissatisfaction, and self-destruction. David eventually finds another job, but hides his past dealings with Sweetness #9 from his vegan daughter, as well as his fast-food-enthusiast son, until the truth must be told. Clark’s storytelling skill lends credibility to elements like David’s wife running off to Ukraine in search of serenity and a trimmer waistline with a 300-pound life coach/nutritionist, and Sweetness #9 tracing its origins to Hitler’s bunker. The energetic mixture of laughter and revulsion, routine and invention, outrage and dismay, fact and fiction, skewer a food industry that provides neither food nor sustenance and damages us in ways we are just beginning to fathom. (Aug.)
close
Details