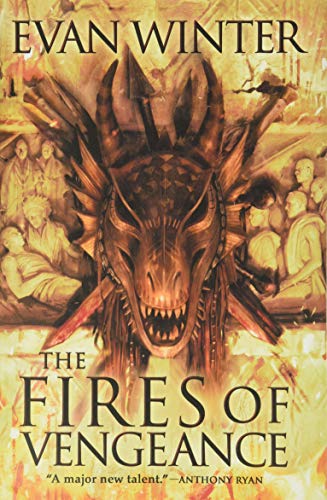 The Fires of Vengeance

Winter returns with a second action-packed installment to the Burning series (following The Rage of Dragons). Tau Tafari—now Solarin—is not the same person he was at the start of the series after losing loved ones in and out of battle, confronting entitled Nobles who wish to see him fail, dealing with a surprise attack on the capital, and becoming Queen Tsiora’s Champion. What hasn’t changed? Tau’s palpable rage at the classist system that oppressed his family and his ever-present desire to avenge the deaths of those he cared about. As Queen Esi’s sister, Tsiora, and her army move to reclaim Palm City, Tau and his sword brothers seek advantages against those who write off their caste as Lessers. All the while, Tau navigates an increasingly complicated relationship with the queen. With energizing battle scenes and well-handled romance, Winters capably earns readers’ attention again as he unfurls the politics of a nation in-flux. This forceful second epic will delight fans and newcomers alike—and leave readers holding their breath for the next in the series. [em]Agent: Erin Malone, WME. (Nov.) [/em]