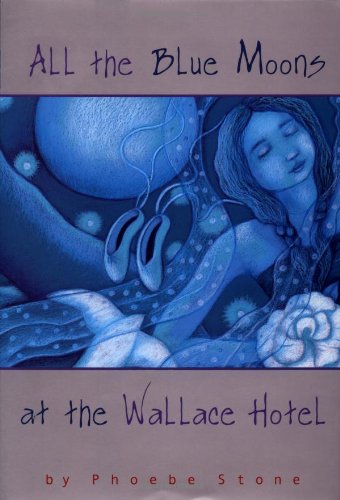 All the Blue Moons at the Wallace Hotel

Stone (When the Wind Bears Go Dancing) turns from picture books to middle-grade fiction with a novel about a family devastated by a shocking ""incident."" Set during the Kennedy administration, the story is heavy with references to period TV shows, hand-me-down poodle skirts and Necco Wafers, details that may seem to the target audience as mannered as the characters. The narrator, 11-year-old Fiona, who makes much of her admiration for Franklin and Eleanor Roosevelt, lives with her younger sister, Wallace, in a dilapidated mansion, surrounded by their withdrawn, ex-sculptress mother's unfinished statues. Fiona wants to fit in, and she also wishes more than anything to dance, but her passion (partly born from her father's likening of Fiona to his mother, a Russian ballerina) never transcends plot device. Indeed, Fiona remains more a lens than an effective central character, overshadowed by the unconventional, angst-ridden Wallace and their friend Kit. Allusions are made to better times four years earlier, but Wallace must run away, and be found, before the author reveals the family tragedy--the father was shot to death in their home. The family's recovery from their grief seems pat, and readers who have labored through the lengthy build-up may feel let down by the conventional resolution. Ages 9-12. (Sept.)
close
Details