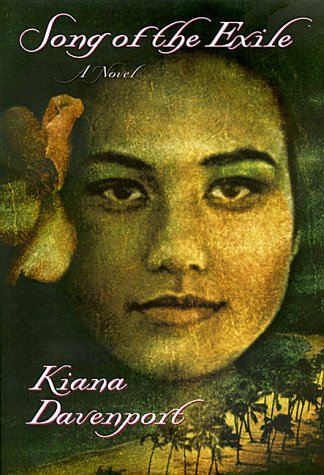 Song of the Exile

The devastating effect of WWII on two Hawaiian families pervades this haunting novel that spans three continents and decades. Davenport (Shark Dialogues) traces the stories of Sun-ja Uanoe Sung (Sunny), a Hawaiian/Korean student from an educated family, and Keo, a native jazz musician, who meet and fall in love in Honolulu in the mid-1930s. When Keo (sometimes known as Hula Man) gets a chance to travel with a jazz band, he leaves Sunny for New Orleans and Paris. His reputation as a genius hornblower blossoms as quickly as racist violence darkens Nazi-infested Europe. Sunny escapes her fractured family life in Honolulu and journeys to join Keo in the City of Light. She revolts against the Nazi brutality she finds there, worrying also about the fate of her clubfooted sister, Lili, who was cast out by their father before Sunny was born. Arriving in Shanghai to look for Lili, Sunny is kidnapped and held captive as a ""P-girl,"" servicing Japanese soldiers. Sunny is selected by one officer for proprietary use; her harrowing plight and that of thousands of other women and girls (some prepubescent) are described in searingly graphic detail. After the war, these women (who've aged several decades for every year of captivity) are too traumatized and ashamed to aid the Allies' feeble attempts at prosecution. There seems to be no real recovery from this level of atrocity, and Keo's story cannot equal Sunny's in intensity. After the war, Keo continues to search for Sunny, mourning and playing music. While the novel's nonsequential structure feels disjointed early on, it gains focus and power as Sunny's story unfolds. In the political maneuvering for Hawaii's statehood in 1959, the two families, bearing their emotional and physical scars, find some form of healing. Davenport's prose can verge on the purple, especially when describing Keo's musical artistry, yet overall she tells a powerful tale of love and loss. (Aug.) FYI: Davenport grew up in Honolulu, the daughter of a native Hawaiian whose ancestors were Tahitians, and a U.S. sailor from Alabama.
close
Details