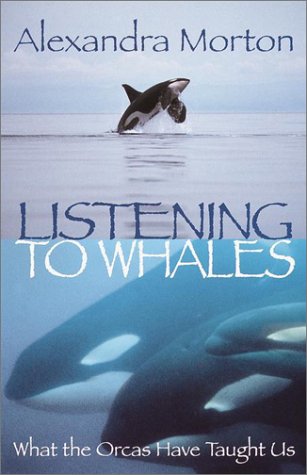 LISTENING TO WHALES: What the Orcas Have Taught Us

Orca researcher Morton describes her more than 20 years studying the movements and sounds of orcas, the mammals, actually dolphins, commonly known as killer whales, or, regionally, blackfish. After getting her ears wet cataloguing the recordings John Lilly (the author of ) made of his controversial language experiments with dolphins, Morton turned her own hydrophone on the captive orca pair Orky and Corky, at the now closed Marineland of the Pacific in Palos Verde, Calif. Inspired by Jane Goodall as an important but rare model, she soon decided to find wild orcas to record—launching her lifelong study of the animals in the coastal waters of British Columbia. She has faced down the inherent difficulty of finding the elusive creatures she studies, the periodic economic uncertainty of life in a remote place and the death of her husband in a diving accident. Throughout her warm, energetic memoir, she relates her work to the strides made by other marine biologists, consistently balancing her open curiosity about the vagaries of mother nature with solid scientific inquiry. In later chapters, her focus turns to the impact of salmon farms on the coastal ecosystem. Morton's rich descriptions of individual orca movements, and how each relates to the species as a whole, course alongside her passionate defense of the ecological balance of the region; she infuses both with just the right amount of personal reflection to make this an engaging tale of a woman's commitment to science and a life well lived.