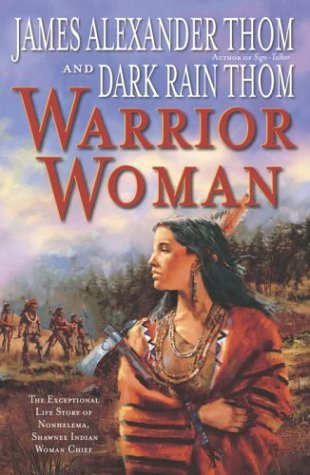 In 1774, on the eve of the American Revolution, a female Shawnee warrior chief preached peace to her angry tribe, whose homeland on the banks of the Ohio river was threatened by the Virginia army. In this dense, moving fictional account of 12 critical years in Shawnee history, veteran historical novelist Thom ( , etc.) and his Shawnee wife tell the story of a remarkable woman who led her people's doomed resistance against her better judgment. Nonhelema, whose name means "Not a Man," and who was called the "Grenadier Squaw" by the British for her height and bearing, witnessed white aggression and treachery on a daunting, even revolting scale. (Perhaps the worst was a massacre of "Praying Indians" of the Delaware tribe.) Nevertheless, she converted to Christianity and was slow to dismiss all whites, two of whom (George Morgan and Alexander McKee) were her lovers and fathers of her children. Her faith in a peaceful solution is sorely tested by the galling settlement the Shawnee are forced to accept after their defeat in 1774, but worse is yet to come. The story is slow-moving and rather disjointed, and there are some anachronistic asides—one character coins the term "herstory"—but impressive research and well-rounded characters give the novel force and breadth. Nonhelema, a nuanced creation herself, is surrounded by intriguing secondary figures like Fani, her adopted white daughter; Brother Zeisberger, a manipulative missionary; and Justin Case, a cowardly soldier inspired to greatness by Nonhelema.