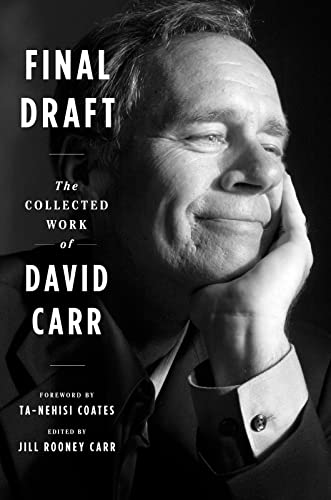 David Carr (The Night of the Gun), who died in 2015, was a consummate journalist with a gift for memorable expression, as demonstrated in this rewarding volume edited by his widow. Its 56 columns and features span his 25-year career and beats that ranged from Minnesota to Manhattan, where, from the New York Times’s culture desk, he wrote “The Carpetbagger” film industry column. The pieces include celebrity profiles (such as of Neil Young and Philip Seymour Hoffman), a look at the fall of the Tribune Company’s newspaper empire, and dissection of local Washington, D.C., politics. The most powerful selections, about Carr’s early struggles with cocaine and alcohol addiction, frequently serve up observations stunning in their candor and self-awareness: “Crack users are universally paranoid consumptive eunuchs who show little interest in things unrelated to their addiction.” Throughout, Carr’s work is a model of concision, demonstrating a skill at crystallizing an idea in a single resonant sentence as, when writing about 9/11’s impact on New York City’s psyche, he observes, “This is the place where the world seemed to end in a single morning.” Readers will appreciate having this wide-ranging sample of Carr’s inimitable perspective on American life. Agent: Flip Brophy, Sterling Lord Literistic. (Apr.)
close
Details