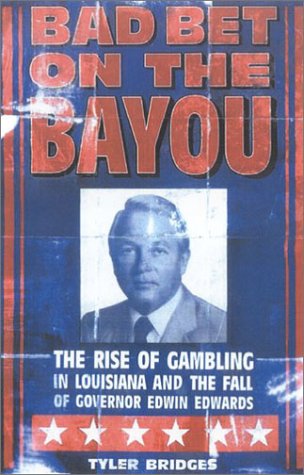 BAD BET ON THE BAYOU: The Rise of Gambling in Louisiana and the Fall of Governor Edwin Edwards

As a New Orleans reporter, Bridges covered the early '90s senatorial and gubernatorial campaigns of presidential hopeful David Duke, etching a sober portrait in (1994). Four years later, Bridges joined the where he won a 1999 Pulitzer as part of an investigative team and began work on this book. He traces the historical background of gambling in Louisiana from pre–Civil War riverboats and the Louisiana Lottery (shut down by the federal government in 1907) to 1940s casinos. Edwin Edwards (aka "Silver Zipper," aka "Cajun King"), the only man to be elected governor of Louisiana four times, in the 1970s, '80s, and '90s, "could charm a society matron one minute and an oil-rig worker the next." When the bayou state's oil boom bottomed out in the 1980s, Edwards decided gambling could revive the economy, but the cash flow through casinos, riverboats and video poker led to corruption, greedy promoters and "snake-oil salesmen in expensive suits," as the put it. Following FBI wiretaps and raids, the 72-year-old Edwards was indicted and convicted on charges of extortion from riverboat casino companies. Numerous quotes re-create remembered dialogue in this fascinating and fluid narrative reconstruction. Describing Louisiana as the country's most "exotic" state, Bridges does a formidable job of capturing its allure (as well as that of the former governor), but his easy flair is supported by high journalistic standards, including his meticulous attention to details and his exhaustive research—which, all in all, make for an irresistible read. Photos not seen by .