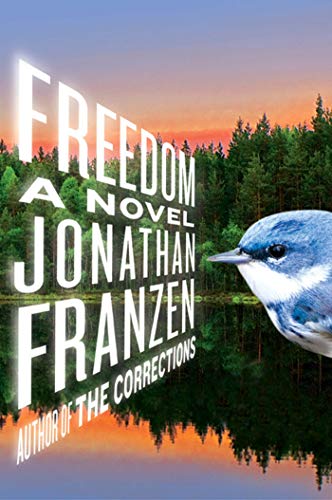 Nine years after winning the National Book Award, Franzen's The Corrections consistently appears on "Best of the Decade" lists and continues to enjoy a popularity that borders on the epochal, so much so that the first question facing Franzen's feverishly awaited follow-up is whether it can find its own voice in its predecessor's shadow. In short: yes, it does, and in a big way. Readers will recognize the strains of suburban tragedy afflicting St. Paul, Minn.'s Walter and Patty Berglund, once-gleaming gentrifiers now marred in the eyes of the community by Patty's increasingly erratic war on the right-wing neighbors with whom her eerily independent and sexually precocious teenage son, Joey, is besot, and, later, "greener than Greenpeace" Walter's well-publicized dealings with the coal industry's efforts to demolish a West Virginia mountaintop. The surprise is that the Berglunds' fall is outlined almost entirely in the novel's first 30 pages, freeing Franzen to delve into Patty's affluent East Coast girlhood, her sexual assault at the hands of a well-connected senior, doomed career as a college basketball star, and the long-running love triangle between Patty, Walter, and Walter's best friend, the budding rock star Richard Katz. By 2004, these combustible elements give rise to a host of modern predicaments: Richard, after a brief peak, is now washed up, living in Jersey City, laboring as a deck builder for Tribeca yuppies, and still eyeing Patty. The ever-scheming Joey gets in over his head with psychotically dedicated high school sweetheart and as a sub-subcontractor in the re-building of postinvasion Iraq. Walter's many moral compromises, which have grown to include shady dealings with Bush-Cheney cronies (not to mention the carnal intentions of his assistant, Lalitha), are taxing him to the breaking point. Patty, meanwhile, has descended into a morass of depression and self-loathing, and is considering breast augmentation when not working on her therapist-recommended autobiography. Franzen pits his excavation of the cracks in the nuclear family's facade against a backdrop of all-American faults and fissures, but where the book stands apart is that, no longer content merely to record the breakdown, Franzen tries to account for his often stridently unlikable characters and find where they (and we) went wrong, arriving at—incredibly—genuine hope. (Sept.)
close
Details