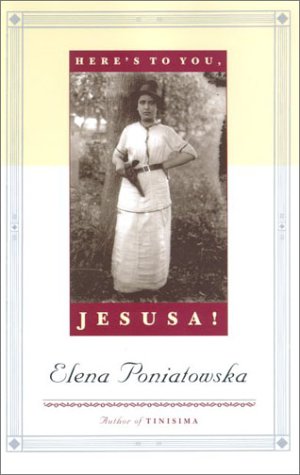 Here's to You, Jesusa!

Originally published in Mexico in 1969, this passionate and unflinching classic deserves a warm reception upon its belated publication in English. In the Latin American tradition of the testimonial novel, acclaimed Mexican author and journalist Poniatowska (Dear Diego; Tin!sima) ""reports"" the life storyDfalling somewhere between fact and fiction, and based on a series of interviewsDof a poverty-stricken but amazingly independent woman. Left motherless and with a roaming father in impoverished turn-of-the-century Oaxaca, Jesusa is married at age 15 to an abusive cavalry captain during the Mexican revolution. Always a tomboy, she turns increasingly irascible, vindictive and opinionated, everything a Mexican woman of her time is not supposed to be. When her husband is killed three years after their marriage, Jesusa remakes herself repeatedly, taking on various trades to support herself. She repudiates modern life, has several run-ins with the law and takes comfort in an eccentric religion. As an independent woman at the beginning of the century, she is something of a pioneer and role model, though her eccentric ways leave her lonely and solitary. Because Jesusa, whose real name was Josefina B""rquez, didn't allow herself to be tape-recorded, Poniatowska painstakingly transcribed her story. The result is one long breathtaking monologue, its only plot the incredible life story of its protagonist. Poniatowska never intrudes, but the warmth she feels for Jesusa infuses the sentimental introduction and spills over into the text. Both women benefit from their unusual relationship, Jesusa validating Poniatowska's Mexican existence and Poniatowska saving Jesusa from anonymity. Loss, alienation and hardship are palpable in the narrative, ably translated by Heikkinen, yet faith in survival and self makes this a life-affirming tale. (Feb.)
close
Details