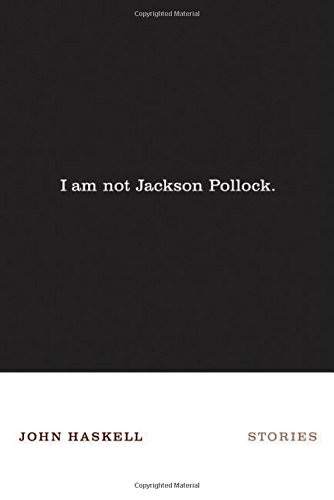 I AM NOT JACKSON POLLOCK

Haskell evades definition in his audacious debut collection, creating an innovative blend of fact and fiction and deliberately eliding the difference between them. Most of the nine stories are imaginative extrapolations of the lives of real people (or, in some cases, real animals), such as the eponymous painter and his wife, Lee Krasner; stars Janet Leigh and Anthony Perkins; Laika, the first dog in space; and Saartjie, the early 19th-century South African woman brought to London as the famous sideshow attraction the Hottentot Venus. Haskell mixes anecdotes from the lives of these artists and celebrities with fictitious events to compose deceptively simple vignettes in which he distills and clarifies moments of intense psychological struggle. Jackson Pollock sees a beautiful woman as he enters a bar in "Dream of a Clean Slate," "but he was feeling a thing he called nervousness, a feeling in his body that he didn't like, so he stopped at the bar for a drink, a whiskey... part of him—-his desire—goes to the girl, and the rest of him stays at the bar, drinking and trembling." In "The Faces of Joan of Arc," Mercedes McCambridge, the voice of the devil in , tries vainly to stop drinking; actress Renee Falconetti tries to understand her role as the title character in ; and an aging Hedy Lamarr shoplifts a tawdry department store dress. "Elephant Feelings" weaves together the stories of the Hottentot Venus; Topsy, the elephant whose electrocution was famously captured on film in the 1900s; and the Indian god Ganesh, half man, half elephant. Betrayal and humiliation, coupled with an inability to communicate, drives all three to acts of violent rage. Haskell subtly explores questions of exploitation and agency through the eyes of his celebrity characters, winking all the while at his own attempts to get into their heads. His hypnotic writing creates its own genre, unsettling and quietly bizarre.