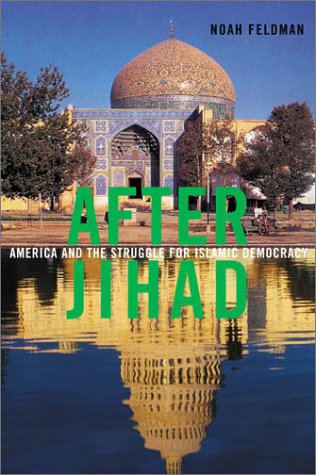 AFTER JIHAD: America and the Struggle for Islamic Democracy

Feldman is careful to distinguish his first book from some of the spate of recent works with the word "jihad" in the title, which contend that anti-Western, violent brands of Islam are growing in strength and bravado. Feldman argues, on the contrary, that September 11 and more recent sporadic attacks mark "the last, desperate gasp of a tendency to violence that has lost most of its popular support." Violent jihad, or struggle, he asserts, has lost its luster in the Muslim world except in cases of self-defense, and most Muslims find both Islamic ideals and democratic values appealing. The question then becomes, "Would democratically elected Islamic governments be good or bad for Western interests?" His answer is that we shouldn't fear the worst. Feldman, a professor at New York University's School of Law with a doctorate in Islamic thought from Oxford, notes that both Islam and democracy are based on human equality and are highly flexible, and disputes claims that they are incompatible. About a third of the book is taken up with overviews of Islam and democratic development in specific countries and regions, such as Iran and Indonesia; these chapters cover well-hashed territory, but make useful summaries for nonexperts. Diehard proponents of a separation between mosque and state may remain unconvinced that elected Islamic governments would support such liberal notions as women's rights or religious freedom. But the strength of Feldman's work lies in his consistent and simple reminder that the emergence of democracy in some countries will not necessarily bring about Islamist rule, and that suppressing it would itself be downright undemocratic.