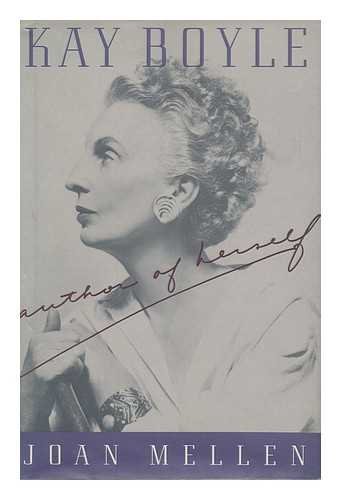 Kay Boyle: Author of Herself

Mellen's intimate, admiring, captivating biography of Boyle (1902-1992), short story writer, poet, novelist, memoirist and political activist, follows her egocentric trajectory as a ``citizen of the planet.'' Fiercely ambitious, romantic, Minnesota-born Boyle moved to Paris in the 1920s, becoming a modernist writer and ``golden girl'' of the expatriate set. In the 1930s, living in Vienna with her second husband Laurence Vail, a surrealist painter, Boyle wrote emotive anti-Nazi pieces meant to show, as Mellen observes, how fascism ``might be seen as a means to self-respect by ordinarily moral, indeed virtuous people.'' A New Yorker correspondent in postwar Europe, Boyle returned to the U.S. with her third husband, Austrian baron Joseph von und zu Franckenstein, to defeat a McCarthyite witchhunt branding them traitors. Boyle, living in the San Francisco area, emerged in the '60s as a writer of social conscience, fighting racism, militarism and the Vietnam war, but in her politics, as in her self-dramatizing fiction, she was ``heroine of her own life,'' notes Mellen ( The Waves at Genji's Door ). An antifeminist who deemed the women's movement too narrow, she bore six children, viewing procreation as ``a woman's natural destiny.'' Although Boyle was then forced to write for money, subverting her talent, Mellen makes a plausible case that her finest work, in particular her short stories, should be revived. Photos not seen by PW . (Apr.)
close
Details