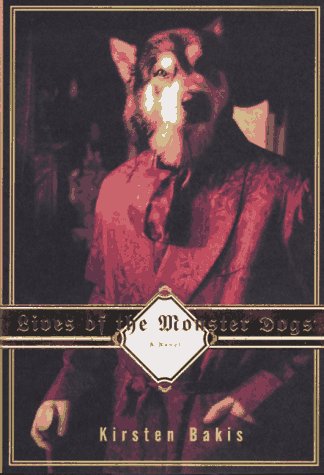 Lives of the Monster Dogs

Cosmopolitan Manhattan of 2008 embraces a new breed of immigrant in this weird, fanciful tale of surgically enhanced, talking, bionic canines out on the town as they search for their history and place in the world. Conceived by 19th-century Prussian mad scientist Augustus Rank as an army of superior, fiercely loyal dog soldiers, the monster Pinschers, Rottweilers, German Shepherds, Dobermans and other sturdy breeds became fully empowered only many years after his death. Rank's followers, secluded in a remote Canadian village, continued his work, ultimately developing a race of super-intelligent, longer-living dogs trained from birth to use surgically attached mechanical hands, speak fluent German via a mechanical voice box, walk erect and dress in the elegant human fashions of the 1880s. NYU student Cleo Pira develops friendships with a few of the dogs in New York and becomes their liaison to the human press, writing insider articles for Vanity Fair and other chic magazines. Cleo narrates the novel, incorporating excerpts from the papers of Ludwig Von Sacher, the dogs' historian. First-novelist Bakis holds the reader in thrall for much of her imaginative tale, but, disappointingly, the dogs never emerge as strong characters. Though the reader gains some understanding of Ludwig through his writing, Cleo's conversations with the dogs are uniformly abrupt and anti-climactic. Instead, Bakis offers more of a dream vision that, ultimately, might be all in Cleo's head. Fortunately, that vision is engaging in its own right and, through Bakis's storytelling skill, makes for an audacious, intriguing and ultimately haunting debut. (Feb.)
close
Details