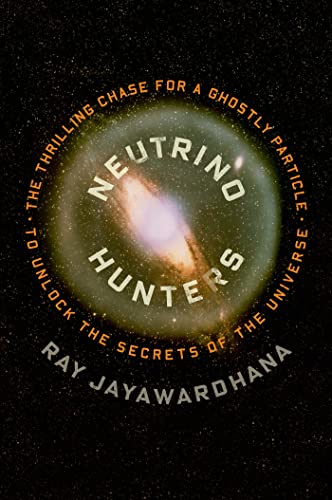 Neutrino Hunters: The Thrilling Case for a Ghostly Particle to Unlock the Secrets of the Universe

While the Higgs boson has dominated recent physics news, astrophysicist Jayawardhana (Strange New Worlds) directs attention toward neutrinos, the “pathologically shy” elementary particles that offer a window into supernovas and may help answer questions about antimatter, dark matter, dark energy, and the early universe. With no electric charge and very little mass, neutrinos seldom interact with matter, for the most part passing untouched through the Earth itself; detection requires looking for particles created in the wake of the scant interactions that do occur. With clarity and wry humor, Jayawardhana relates how Wolfgang Pauli “invented” the neutrino to explain where missing energy went during beta decay, then later bet a case of champagne that it would never be detected experimentally. After neutrinos were finally observed for the first time in 1956, scientists expanded the hunt from Earth to space, examining the rays emitted by the Sun. From deep underground in South Dakota’s Homestake Gold Mine to Antarctica’s IceCube, currently the world’s largest neutrino detector, Jayawardhana vividly illuminates both the particle that has “baffled and surprised” scientists, and the researchers who hunt it. Agent: John Pearce, Westwood Creative Artists. (Dec.)
close
Details