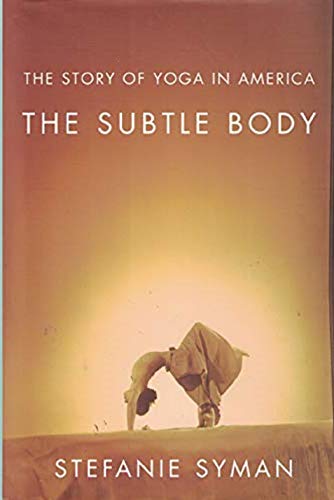 The Subtle Body: The Story of Yoga in America

Yoga conquers America—and is conquered in its turn—in this labyrinthine cultural history. Journalist Syman traces American enthusiasm for yoga back to Thoreau and follows it through cycles of waxing and waning popularity: it was decried by Victorians for its association with madness and tantric sex rituals, celebrated in the 1960s for its association with altered states of consciousness (and tantric sex rituals), and ubiquitously embraced in the 21st century as a wholesome, anodyne exercise program. The author argues that, even as the om-chanting adept became the embodiment of spirituality, yoga's mainstreaming risked the discipline losing its rich spiritual content, along with the more extreme contortions, regular enemas, and whatever else Americans considered off-putting. Unfortunately, the author's attempts to clarify yoga's spiritual content, which is multifarious and intractably murky, don't always succeed, and sometimes the narrative bogs down amid barnstorming swamis and their squabbling sects. When she pulls back to view the culture mashup yoga has become—“a cure for back pain, a beauty regime, and a route to God”—she gives a cogent, engrossing analysis of this Asian-born spiritual practice turned all-American panacea. 8 pages of b&w illus.