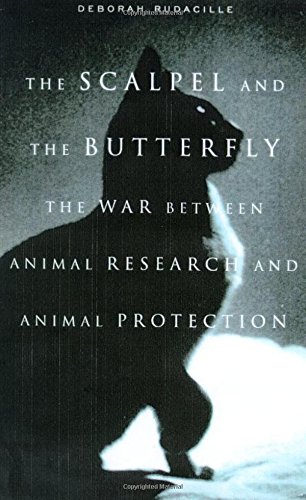 The Scalpel and the Butterfly: The War Between Animal Research and Animal Protection

In this cautious, useful survey, Rudacille, a former writer and editor at the Johns Hopkins Center for Alternatives to Animal Testing, seeks a middle ground between biomedical researchers who defend animal experimentation as a necessary trade-off for potential benefits to humankind, and animal rights activists who would abolish such research. She begins with a lively account of the 19th-century antivivisection movements in Britain and the U.S., in which women figured prominently, then takes a side trip through Nazi Germany, where a ban on vivisection (perversely considered an aspect of mechanistic ""Jewish"" science) went hand in hand with appalling medical abuses, including eugenic sterilization, euthanasia and experimentation on human subjects. She provides in-depth profiles of animal rights pioneer Henry Spira and PETA (People for the Ethical Treatment of Animals) cofounders Alex Pacheco and Ingrid Newkirk. The absolutist tactics of the most visible, extremist critics of animal research, such as the Animal Liberation Front, whose members vandalize laboratories, have greatly diminished the moral legitimacy of their cause in the eyes of the public, according to Rudacille. She commends reform efforts in Europe, particularly in Great Britain, where stringent governmental oversight mandates a ""cost-benefit analysis"" for each animal experiment as a prerequisite to approval. Rudacille notes that in America (the world's largest user of lab animals), new technologies--such as organ transplants from animal donors to humans--have sparked intense debate over the ethics of biotechnology and its impact on society; she urges a tandem public debate on how these technologies affect animal welfare, not just human. (Sept.)
close
Details