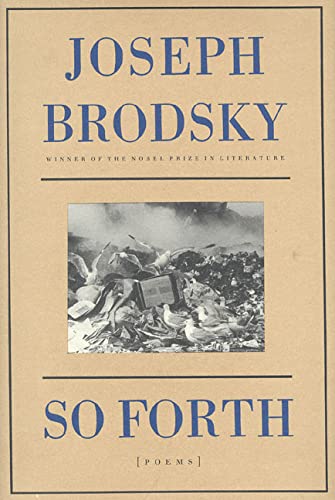 Nobel laureate Brodsky completed work on this sobering and brilliant collection just a week before his death this past January. Over a third of the poems collected here were written in English, Brodsky's adopted language, and the poet himself translated the rest from Russian, sometimes in collaboration. The tone of erudite melancholy which has always flavored Brodsky's verse is here so pervaded with thoughts of exile and mortality as to sometimes verge on outright despair. Among the collection's strongest works is ""A Footnote to Weather Forecasts,"" in which ""snowflakes float in the air like a good example/ of poise in a vacuum."" In ""New Life,"" Brodsky muses that ""Ultimately, one's unbound/ curiosity about these empty zones,/ about these objectless vistas, is what art seems to be all about."" Yet, many of these poems, especially those written in English, have a more colloquial, slang-infused rhyming style which owes a pronounced debt to Auden, as in ""Song of Welcome"": ""Here's your food, here's your drink./ Also some thoughts, if you care to think."" ""Lullaby"" shares its title with one of Auden's most famous verses: ""Grow accustomed to the desert/ as to fate/ lest you find it omnipresent/ much too late."" Brodsky doesn't always seem fully comfortable in this more casual mode; often his slang is clearly not that of a native speaker. But this is a small quibble in the face of an astonishing collection from a writer able to mix the cerebral and the sensual, the political and the intimate, the elegiac and the comic. In the book's final poem, ""Taps,"" Brodsky, imagining his death, seems to offer a self-effacing wink, as if he were amused by the power he claims for poetry: ""I'll twinkle among the wires, a sky's lieutenant,/ and hide in clouds when thunder roars,/ blind to the troops as they fold their pennant/ and run, pursued by the pen, in droves."" Brodsky's death is a loss to literature; his final collection of poems is the best consolation we could ask for. (Sept.)
close
Details