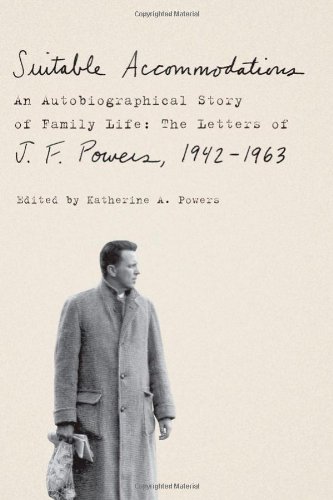 Suitable Accommodations: An Autobiographical Story of Family Life: The Letters of J.F. Powers, 1942–1963

In his fiction, Powers (1917–1999), the celebrated Catholic writer best known for his National Book Award–winning 1963 novel Morte D’Urban, explored the culture of postwar American Catholicism and the lives of Midwestern priests. These vibrant letters, collected and edited by his daughter, Katherine, reveal a restless, promising writer and family man with a wry sense of humor and a hunger for literary camaraderie. The daily business of balancing the needs of his wife and five children with his work often had the family on the move throughout the Midwest, and four relocations to Ireland, as they hunted for the perfect home, a part-time teaching position, or an ideal landscape that might allow Powers to have time to write. He intended to publish a novel about family life, but as his daughter explains in the introduction, Powers was “not only living [the unfinished novel] but creating and embellishing it in his correspondence.” The bulk of the letters were written to longtime friend and patron Father Harvey Egan and to Powers’s wife, Betty, when the two were apart. Other noted correspondents include Robert Lowell, Elizabeth Hardwick, Jack Conroy, and Katherine Anne Porter. While primarily for Powers scholars, this collection serves as a touching portrait of one writer’s struggle. Agent: Andrew Blauner, Blauner Books Literary Agency. (Aug.)
close
Details