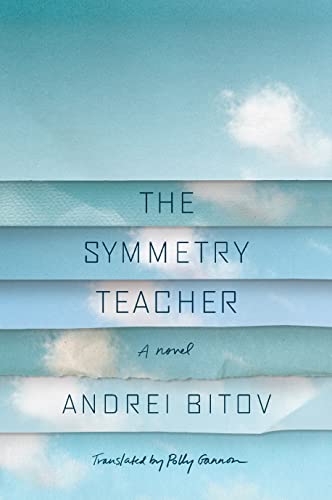 Blending elements of Nabokov, Calvino, and Percival Everett, Bitov’s (Pushkin House) shape-shifting novel is not really a novel so much as a narrative puzzle that revels in its own language. The premise: the author, Andrei Bitov, remembers a novel he translated into Russian long ago while he was bored on a geological expedition; the book, by an obscure English writer named A. Tired-Boffin, is called The Teacher of Symmetry. The problem: he can’t find the book anywhere. And so, the meat of this novel is not Bitov’s translation of The Teacher of Symmetry, but simply his memory of The Teacher of Symmetry. In Bitov’s recollection, the eight chapters in Tired-Boffin’s novel may each be read as a standalone work. Each chapter echoes the others in both plot and theme (obsessions of various kinds abound), and one gets the sense, while following Bitov’s winding remembered translation, that we are in the presence of one of literature’s most formidable unreliable narrators. Chapters stop and start, as well as misdirect. In one, the peculiar friendship between a town idiot and a doctor in Taunus, Germany, is recounted for 50 pages; on the final page, the story is revealed to be the reason why the doctor later speaks out against the authenticity of the Shroud of Turin. In another chapter, writer Urbino Vanoski (the main protagonist here, at least as Bitov remembers it) travels to an island inhabited by a dog named Marleen and by either one woman or a woman and her twin (one of the two might also be named Marleen). Bitov, a pioneer postmodern writer, packs physics-defying deaths, mysterious doorbells, and space aliens into this lively literary feat. (July)
close
Details