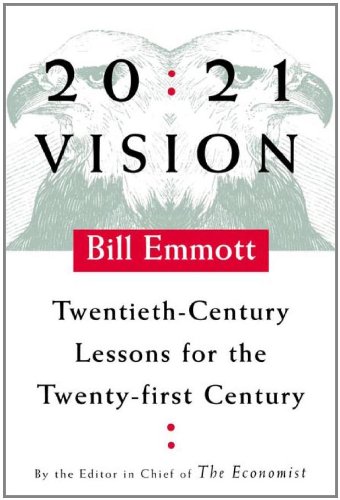 Emmott, who predicted in 1989 that Japan's economic ascent would falter (in ), now applies his powers of conjecture again to project how broad historical forces will shape the 21st century, based on an analysis of the 20th. Editor in chief of the , Emmott is a believer in the relative benevolence of American dominance and the relative rewards of unleashed capitalism. The two most important dynamics of the 20th century, he says, were the "United States taking over from Britain" as the protector of global order and capitalism's struggle against its authoritarian antagonists. Emmott believes the most crucial questions for the 21st century are whether America "will continue to keep the peace" and whether "capitalism will survive." Assessing the potential threats to American supremacy—China, Japan, the European Union, terrorism and the precariousness of America's commitment to internationalism—Emmott is cautiously optimistic about America's capacity to continue its leadership role. He is sometimes uncritical in prescribing freer markets as a panacea, but his endorsement of capitalism is carefully qualified. He identifies four flaws threatening its survival: Capitalism is "Unpopular," "Unstable," "Unequal" and "Unclean," in the words of his chapter headings. Despite limited government interventions to correct these dysfunctions, Emmott is hopeful that capitalism can expand its domain in the coming century. It is a wide-ranging and speculative project, and Emmott occasionally floats off into a breezy punditry. But mostly, his arguments are well grounded and his vision of the future is insightful.