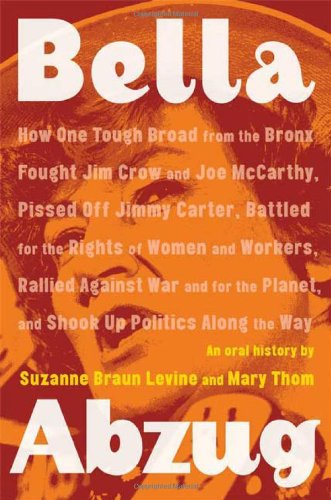 Member of Congress and civil rights, antiwar and feminist activist, Bella Abzug (1920–1998) was one of the 20th century's greatest progressive leaders. Since she left only an unfinished memoir, two friends and colleagues (Levine wrote and Thom ) have stitched together an “oral biography” of excerpts from Abzug's own writing as well as snippets of interviews with dozens of people, from her high school gym teacher to Jimmy Carter and v. attorney Sarah Weddington. Edward Kennedy recalls working with Abzug on the Freedom of Information Act, and Shirley MacLaine tells about Abzug accompanying her to a channeling session. Abzug emerges as a determined activist and savvy legislator, but prickly; the barrage of admiration is punctuated with occasional barbs: Ed Koch cites one of Abzug's two fellow congresswomen, Shirley Chisholm, as saying, “Oh, that woman has no class.... That woman is so vulgar.” Historians and Abzug devotees will be thankful for Levine and Thom's labors, but the lack of narrative flow—with paragraph after choppy paragraph of recollections from luminaries—leaves one wishing for a more unified, coherent biography.