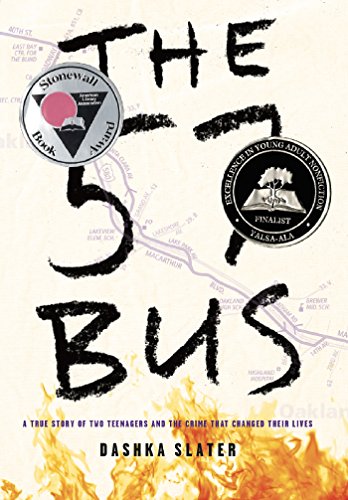 The 57 Bus: A True Story of Two Teenagers and the Crime That Changed Their Lives

Journalist and author Slater (Escargot) offers a riveting account of the events that preceded and followed a 2013 assault in Oakland, Calif. Both Sasha (a white, agender private school teenager) and Richard (an African-American public school student who had lost numerous loved ones to murder) rode the 57 bus every day. One afternoon, Richard—egged on by friends—lit the sleeping Sasha’s skirt on fire, and the resulting blaze left third-degree burns over 22% of Sasha’s body. Sixteen-year-old Richard was arrested and charged as an adult with committing a hate crime. The short, easily digestible chapters take a variety of forms, including narrative, poetry, lists (including terms for gender, sex, sexuality, and romantic inclinations), text-message conversations, and Richard’s heartrending letters of apology to Sasha. Using details gleaned from interviews, social media, surveillance video, public records, and other sources, Slater skillfully conveys the complexities of both young people’s lives and the courage and compassion of their families, friends, and advocates, while exploring the challenges and moral ambiguities of the criminal justice system. This painful story illuminates, cautions, and inspires. Ages 12–up. Agent: Erin Murphy, Erin Murphy Literary. (Oct.)
close
Details