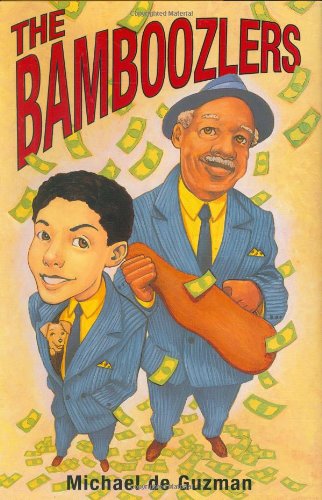 De Guzman's ( ) humorous, snappily paced caper introduces another spunky, credible young hero. Albert Rosegarden wishes his overworked cocktail waitress mother could afford to take a vacation and longs for adventure himself ("There had to be more to life than what he'd encountered so far," he muses). The 12-year-old learns that there is quite a bit more to life when his maternal grandfather, Wendell, long estranged from his daughter, shows up in his ancient camper bus and whisks Albert off on a road trip. Flashing a smile "warm enough to melt ice" and carrying the omnipresent violin case he calls the Stradivarius (the inside of which no one has ever seen), this con man's charisma shines through the exquisitely timed dialogue, delivered in staccato rhythm. The man introduces his grandson to some appealingly eccentric characters, including a former screenwriter who gives Albert his tiny three-legged dog, a failed canine actor. Wendell offers Albert slivers of information about his checkered past, which involved stints in various jobs (none of which was violin player) and a jail sentence. Following his own advice ("Don't leave behind unfinished business if you can help it"), the fellow leads Albert on a madcap escapade as he evens the score with the man who committed the crimes for which Wendell served time. Deftly orchestrating both plot and characters, de Guzman ends the tale on a perfectly pitched note (hint: it involves the Stradivarius). Ages 10-up.