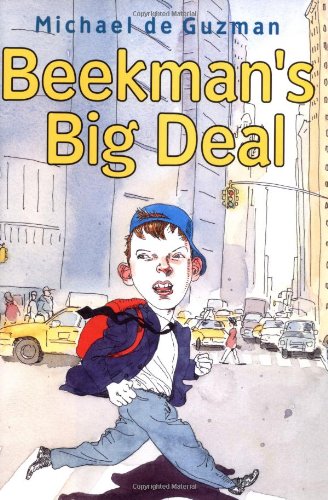 As he did in , de Guzman introduces a sympathetic, quirky protagonist, this one wishing not so much to in as to in—that is, stay put in both his school and home situation. Since the big business deal long promised by Beekman O'Day's widower father, Leo, has not materialized, the two have had to change Manhattan residences frequently. The 12-year-old has attended many private schools, forced to leave each when Leo fails to come up with tuition. Despite being victimized by a sneaky bully, Beekman gradually settles into his latest school (dubbed "Last Chance Academy"), where he makes an unlikely friend whose twin sister catches the hero's fancy. And the boy is thrilled with the small house his father finds on a private mews, surrounded by delightfully eccentric neighbors (including an "extremely good-looking" woman who's handy with tools, and a cross-dresser who impersonates Streisand). When Leo's optimism fizzles and he admits to Beekman that "not even the little deals" have worked out and he's not likely to come up with tuition or rent, the boy digs in his heels and makes a "deal" of his own—to remain right where he is. The author brings this tale to a satisfying denouement, wisely avoiding a tidy wrap-up (it's still not clear how Leo is going to pay tuition or whether he'll find a reliable job). De Guzman strikes a good balance between humor and pathos, creates some memorable characters and depicts an affecting father-son bond. Ages 10-up.