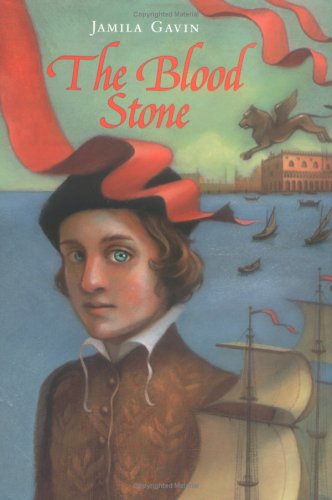 Venetian jeweler Geronimo Veroneo left Italy for Hindustan in search of precious gems 12 years ago, just before the birth of his sixth child, Filippo. Before departing, he married off his oldest daughter to Bernardo Pagliarin, whose business—slaving—should have given some hint of his son-in-law's character. With Geronimo now presumed dead by all but his own family, Bernardo assumes the role of patriarch, intending to marry off the remaining daughters to wealthy men, and take over the jewelry business. Most importantly, he plans to take possession of the "Ocean of the Moon," the "blood stone" of the title—an exquisite diamond pendant. When a messenger arrives with news that Geronimo is a hostage in need of a princely ransom, Filippo's older brother decides that Filippo should be the one to retrieve the man from Hindustan—with the jewel hidden in his body. Filippo's trek across the sea and desert is marked by excruciating headaches, danger (even there he is not safe from Bernardo's reach) and intrigue—as well as unusual powers brought by the gem. Gavin ( ) writes sensually about the 17th century—the floating music of a flute frequently tips off Filippo that spies are near; the scent of cinnamon marks many near-death encounters. Characterization plays second fiddle to period detail and plot, but for those who love meaty historical fiction, this is a thick, juicy helping. The final, tantalizing revelation (Veroneo's pendant was the inspiration for the Taj Mahal) will likely lead those who finish this to want more. Ages 12-up.